How to fold your menstrual cup?

Each fold has it’s own pros and cons but it basically comes down to how small the fold makes the cup and how easily it will pop open once inserted. 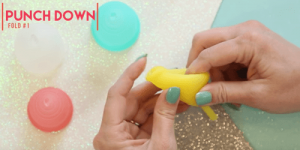 Punch down fold. It’s called this because you take your index finger & Push the top down. To the middle of the bottom of the period cup. When you do this it creates a very small insertion point which is quite close to the size of a tampon. It’s also one that we recommend if you’re using a softer cup that has difficulty opening inside. So what you can do is push the base, once it’s inside, and use that to give you a pop at the rim. 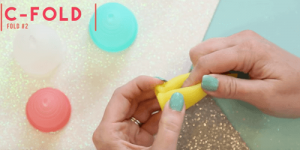 “C” fold. This is very popular & often recommended. You’ll see this in lots of instruction manuals for your new menstrual cup. Take your index finger & push down on the side of the lady cup until one side is touching the other. And then squeeze it together. This is going to make that “C” or “U” shape. This is a very popular fold because you can do it with one finger and you can do it quickly. One thing to note is that, if you’re new, it does tend to open early if you’re not using two hands. And you’re not used to using a cup. The point of insertion is larger than the punch-down fold and some others. However, it is one of the most popular and very easy cup folds. 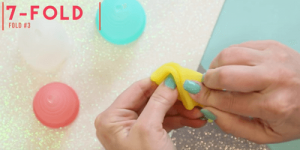 “7” fold. If the punch down or the “C” fold don’t work for you, you could try the “7” fold. Squeeze the cup and fold one side over. This gives you a fairly small point of insertion at the tip. With some tapering and also gives you control over when you want to push the cup open. 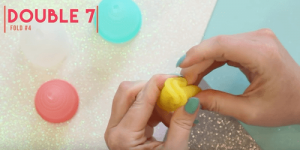 “double 7” fold. Take one side and fold it slightly to the front and take the other side, then fold it slightly down to the back. This gives you that double seven, this is also sometimes referred to as the tulip fold. 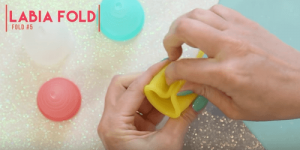 Labia Fold. It is great if you’re having trouble getting a softer cup to open. Take the edge of the cup pinch it, push it down to the middle of the cup, and then squeeze sides around this. What you see is a nub from the top of the cup that’s sticking out from the middle. This is what you can use to push on to try and open the cup if it’s stuck. 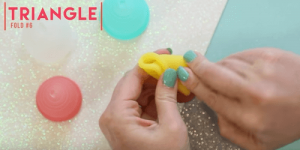 Triangle Fold. It is very similar to the 7 fold. Squeeze the cup and make it flat. Take one corner and bring it down all the way to the base. This gives you a very narrow point of insertion, similar to the punch down fold, but it’s also quicker and easier to do with your hands. If you’re doing it correctly you should have the shape of a triangle on your cup. 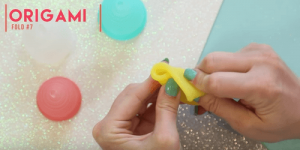 Origami fold, it is similar to the punch down. You want to start with a half punch but then twist it around. This gives it a little bit of a rosebud shape at the top and this also gives you a handy nub that you can use to help open the cup from the bottom. 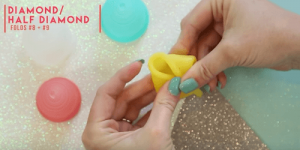 Diamond fold. To perform the diamond fold you’re going to take one side of the top rim and fold it down on the cup towards the base. Then take the left and right side and roll them inwards until they’re touching. This gives you that flat diamond shape. 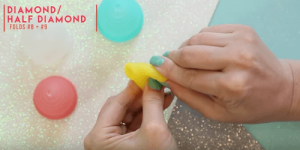 The diamond fold is quite large so what most people do is just fold in half, and this is the half diamond fold. You’ve got a much more narrow point of insertion and you also have this great little nub that you can use to pop the cup open when you insert it. 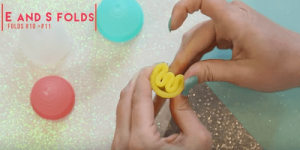 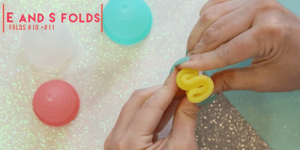 “E” Fold. It is quite impractical. Maybe you want to give it a shot and then little “S” fold. But these are going to be hard to insert because they’re going to want to open at the top.

Using a menstrual cup shouldn’t be this complicated, so we would like you to stick with something a lot more simple. Like the “C” fold or the “U” fold. Very easy, fast and simple. Or the punch down fold.